200
swing
Main Menu
You are here: Home About OOAL 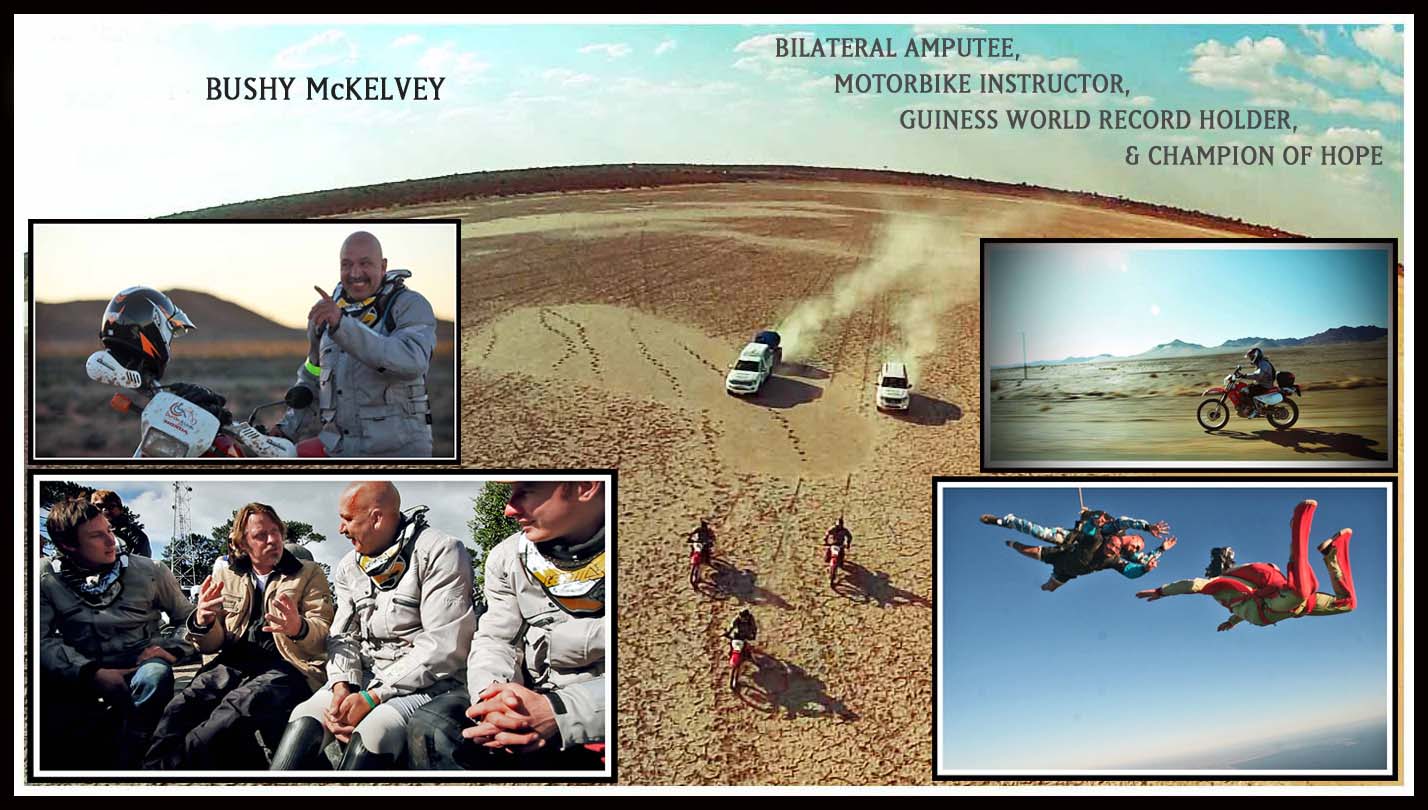 Bushy McKelvey, the initiator of the “Out On A Limb” project, is a bilateral below-the-knee amputee with two prosthetic legs. He lost his legs in two separate vehicle accidents over a decade, the right leg first after being struck by a taxi minibus while riding in 1999. And as if that wasn’t bad enough, nine years later while riding with one prosthetic leg he was again hit by a car in Pietermaritzburg on his way to a biker’s function. Many people by now would have hung up the bike leathers and stayed off the bike, but not Bushy! No, Bushy got back on the bike again and continues to instruct his defensive motorcycle lessons, from beginners to racers and most of the province’s traffic police too. And now he’s planning an amazing bike ride…

After becoming completely legless Bushy registered his charity OUT ON A LIMB. His motivation was to raise awareness and funding for physically challenged folks, and give other disabled people inspiration to get on with their lives. He embarked on a scooter trip around South Africa to meet with Heads of State and other charities, to learn from their ways. Thereafter road trips called, from his home town PMB to Lesotho in 2010 to become the first bilateral amputee to scale Sani Pass, to the Roof of Africa and back and then around Southern Africa in 2012 (including Namibia and Botswana) on a documented motorcycle adventure. At the Cheetah Foundation in Botswana Bushy helped release 4 cheetah back into the wild, and in Namibia OOAL built much-needed toilets, in between skydiving, paragliding and swimming with sharks.

In 2014 Bushy achieved the Guiness World Record at Phakisa Freeway for the greatest distance covered by an individual on a motorcycle in 24 hours, 3256.5km at about 220km/hour, to Credence Clearwater Revival.  This remarkable feat resulted from a bid to raise funds for a prosthesis when Bushy was told about a lady who lost her leg above the knee. Bushy’s record remained unbroken until 2017, and now this intrepid survivor aims to make history, reclaiming his Guinness World Record for the Greatest Distance Covered on a Motorcycle by an Individual in 24 hours from 19th – 20th December 2020!

“He who has a why to live can bear with almost any how.” ~ Friedrich Nietzsche

It’s our huge pleasure to announce that Bushy McKelvey will ride for charity over 24 hours from 18h00 on Saturday 19th December – 18h00 on Sunday 20th December 2020, to reclaim his Official Guinness World Record at Wartburg, KZN!

Bushy’s motivation to endure extreme past personal hurdles has always been his inner purpose, the WHY that gives him grace enough to bear almost any HOW. And he has a big heart for small children, particularly those who are unable to help themselves. So Bushy will ride many taxing hours for the 5000 Per Month Feeding Schemes managed by the Grand Lodge of South Africa. Currently supporting over 2000 children nutritionally each month, the initiative aims to double this number beginning with Bushy’s epic ride and YOUR DONATION PLEASE – simply SMS ‘RACE’ to 40554 and your R20 will be most well spent!

[SMS’s cost R20 and free SMS’s do not apply. Network and administrator fees are deducted from revenue paid]

Please contact us at: ooalorgza@gmail.com for more donation details.

“If you dream it and believe it, you CAN achieve it!”